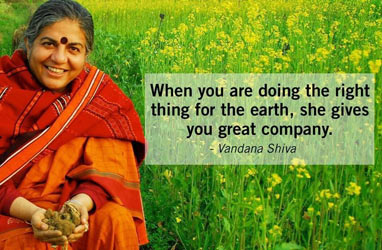 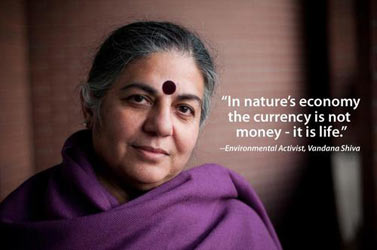 In an age of obsession with everything big, we live under the illusion that bigger is better.

We tend to believe that we need big farms, big dams, big corporations to meet our needs for food and water. Giant corporations have grown bigger with five companies globally controlling the seed supply, food supply and water supply. Among these corporations are Monsanto, Cargill, Nestle, Suez and Wal-Mart. We assume that farms must grow bigger and bigger for food security.

But the reality is that “small is big” — ecologically, economically and politically. The future of food security in India and worldwide lies in protecting and promoting small farmers.
At the ecological level, we know that in a small seed lies the potential for producing thousands and millions of seed. And in each of those seeds lies the potential for thousand and million more such seeds. This is abundance. While the small farmer sows seeds, he prays, “May this seed be exhaustless”.

Yet, when seed is patented or biologically terminated by giant corporations, it cannot multiply or be reproduced. It produces zero seeds. The motto seems to be: “May this seed get exhausted so that our profits never exhaust.”
Small biodiverse farms produce more than large farms. In fact, output and income can be doubled by conserving seeds and intensifying biodiversity. The fact that small is big in agriculture has been known all along, yet big has been privileged as the basis of food security.

India’s former Prime Minister Charan Singh, who was an agricultural economist, had said that small farms are more productive than large farms. “Agriculture being a life process, in actual practice, under given conditions, yields per acre decline as the size of farm increases (in other words, as the application of human labour and supervision per acre decreases). The above results are well nigh universal: output per acre of investments is higher on small farms than on large farms. Thus, if a crowded, capital-scarce country like India has a choice between a single 100- acre farm and forty 2.5- acre farms, the capital cost to the national economy will be less if the country chooses the small farms”.
Small farms produce more food than large industrial farms because small farmers give more care to the soil, to plants and animals, and they intensify biodiversity, not external chemical inputs. As farms increase in size, they replace labour with fossil fuels for farm machinery and toxic chemicals. The caring work of farmers is replaced by harsh and careless technologies. Thus, food production per acre goes down.

Yes, a social tragedy and ecological catastrophe morphs into “myth of more”. And this myth of more is being sold to the world as a solution to hunger. The trick is to not measure total output of a farm, but just the “yield” of a monoculture commodity. Essentially, productivity is manipulated in two ways to project large farms as more productive.

First, the only input that counts is labour, not chemicals, land, water or fossil fuels. So the more small farmers and family farmers are displaced and replaced by chemicals and machines, the false calculus says productivity has increased. When natural resources are taken into account, industrial agriculture is, in fact, an inefficient agriculture, using 10 calories of input to produce one calorie of food.
According to the UN Food and Agriculture Organisation, in spite of all subsidies going to large farms, in spite of all policies promoting industrial agriculture, even today 72 per cent food comes from small farms.
If we add kitchen gardens and urban gardens, the majority of food people eat is grown on a small scale. What is growing on large farms is not food; it is commodities. Only 10 per cent of the corn and soya taking over world agriculture is eaten. Ninety per cent goes to drive cars as biofuel or to animals in factory farms as feed. Small farms feed the world. Big farms spread poisons and hunger.
United Nations Conference on Trade and Development’s (UNCTAD) 2013 Trade and Environment Report states that monoculture and industrial farming methods are not providing sufficient affordable food where it is needed, while causing mounting and unsustainable environmental damage

An International Labour Organisation’s report — “Working towards sustainable development: Opportunities for decent work and social inclusion in a green economy” — shows that small-scale agriculture is the solution to the ecological crisis, the food crisis and the crisis of work and employment. The report cites examples of how small farms in Africa have increased food production through ecological agriculture.
In a project involving 1,000 farmers in South Nyanza, Kenya, who are cultivating two hectares each on average, crop yields rose by 2-4 tonnes per hectare after an initial conversion to organic farming. In yet another case, the incomes of some 30,000 smallholders in Thika, Kenya, rose by 50 per cent within three years.
The International Assessment of Agricultural Knowledge, Science, Technology for Development has also confirmed that small ecological farms are a more effective solution to world hunger than the Green Revolution or genetic engineering.

The living economies of the small need to join hands with the living democracies of the small to create peace and harmony, abundance and well-being.
Gandhi responded to the bigness of the British Empire by pulling out the spinning wheel. As he said, “Anything that millions can do together becomes charged with unique power… The wheel as such is lifeless, but when I invest it with symbolism, it becomes a living thing for me.”

The seed is small, but the powerhouse of life and freedom. Each of us can be savers of seed and growers of food. In Rumi’s words…

UNIVERSAL DECLARATION OF THE RIGHTS OF MOTHER EARTH

We, the peoples of Earth:

gratefully acknowledging that Mother Earth gives us life, nourishes and teaches us and provides us with all that we need to live well;

recognizing that Mother Earth is an indivisible community of diverse and interdependent beings with whom we share a common destiny and to whom we must relate in ways that benefit Mother Earth;

acknowledging that by attempting to dominate and exploit Mother Earth and other beings, humans have caused severe destruction, degradation and disruption of the life-sustaining communities, processes and balances of Mother Earth which now threatens the wellbeing and existence of many beings;

conscious that this destruction is also harmful to our inner wellbeing and is offensive to the many faiths, wisdom traditions and indigenous cultures for whom Mother Earth is sacred;

acutely conscious of the critical importance and urgency of taking decisive, collective action to prevent humans causing climate change and other impacts on Mother Earth that threaten the wellbeing and survival of humans and other beings;

convinced that in order for communities of humans and other beings to flourish we must establish systems for governing human behavior that recognize the inalienable rights of Mother Earth and of all beings that are part of her;

convinced that the fundamental freedoms and rights of Mother Earth and of all beings should be protected by the rule of law, and that the corresponding duties of human beings to respect and defend these rights and freedoms should be enforced by law;

pledge ourselves to cooperate with other human communities, public and private organizations, governments, and the United Nations, to secure the universal and effective recognition and observance of the fundamental freedoms, rights and duties enshrined in this Declaration, among all the peoples, cultures and states of Earth.

Mother Earth has the right to exist, to persist and to continue the vital cycles, structures, functions and processes that sustain all beings.

Article 3 Fundamental rights and freedoms of all beings

Article 4 Freedom of animals from torture and cruelty

Every animal has the right to live free from torture, cruel treatment or punishment by human beings.

Article 5 Freedom of animals from confinement and removal from habitat

Human beings have a special responsibility to avoid acting in violation of this Declaration and must urgently establish values, cultures, and legal, political, economic and social systems consistent with this Declaration that:

Article 7 Protection of the law